Ringing in the New Year

It used to be that the house’s main bell ringer was Fireball, with an occasional contribution by Macaroni.  However, in recent months Pepe has learned to jump up and run along the railing at the top of the stairs.  (Mind you, he and his brother are front-paws declawed, so this is an activity that is not for the faint of heart!) 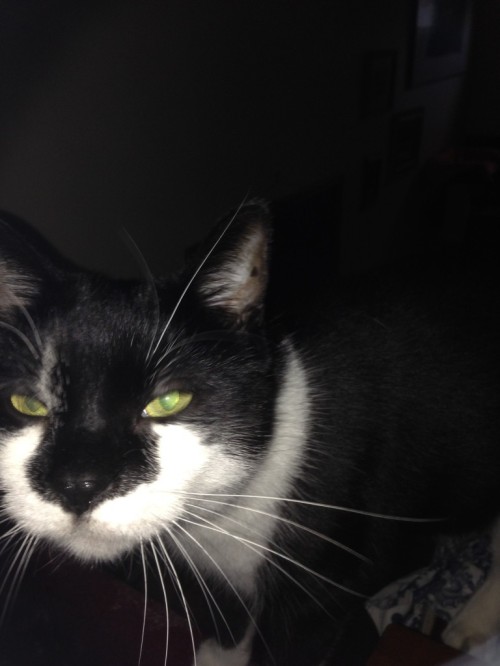 He does it when the human is moving too slowly getting early-morning chores done upstairs, which of course is delaying his breakfast gratification.  When the human is in the hall dawdling, as sleepy humans will do, he gets on the rail and runs along the blankets right up to the 2-legged. He then sticks that inquisitive nose (and face) out to see what’s taking her attention away from the all-important topic of food. If she’s still not paying attention, he squeaks at the silly human to hurry her up.

When the human is in one of the bedrooms either pulling out clothes, changing water, or cleaning the multitude of litter boxes, he sits on the newel post and bangs on the wind chimes directly above him.  I guess that’s his way of ringing in the new year.

Happy, healthy, prosperous 2016 everyone from the kitties and the lower lifeform (aka the human).

The trio have always been big community cuddlers right from the start. The duo have come to community cuddling late and reluctantly, but even they now climb into the kitty beds with one or more of the other cats or tolerate another cat climbing in with them. It’s amazing what wintertime cold and the delights of fleece blankets will do for fostering good will between kitty people.

Here are some recent photos of Fireball and Mac mid cuddle fest. Just to the right of them (from our perspective) is the Big Guy.

Notice how Caesar Tiger Bear appears to be dozing but really has one eye open a slit just to make sure the annoying human stays away from his paws while she’s taking pictures with the cursed camera.  Yes, we are big fans of fleece fabrics in this house!

The kitties have been having a rousing time of late digging out particular toys from their 3 toy boxes on the stairs.  Clearly, whatever it is that they want is ALWAYS on the bottom of one of the boxes.  Walking downstairs in the morning in semi-darkness with lots of items in hand has become a hazardous proposition for the human.

Since the kitties got lots of new toy mice from Sandy Claws for the holidays, perhaps it’s time for a sorting session to reduce the number of toys available in the boxes…at least the really ratty mice can go to toy-mice heaven.

Okay, the human is the first to admit that she has a tiny bias with regards to how handsome Caesar is.  However, she thinks he’s just gorgeous.

<<Ahh, she’s found me. And she’s got that ever-annoying camera with her again. Hopefully she just takes a few shots and walks on by.>> 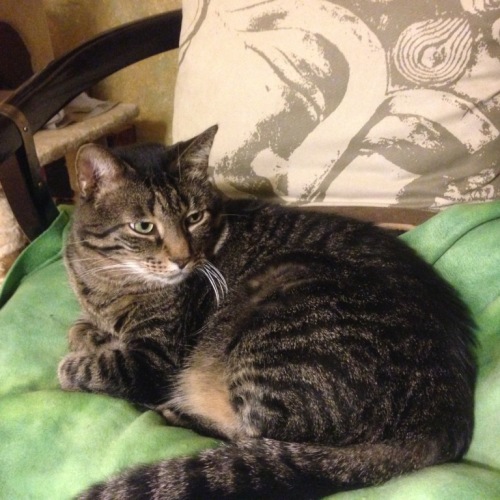 He’s actually the reason the other members of the trio found a new home. The human found him online first and fell in love with him just from his photos. He was the only one of the three who came near her that first night (he walked by twice and bumped her in the back).  He’s such a delight (paw hiding aside).  It’s hard to believe he was almost 4 years old before he was adopted and no one except his foster mom wanted to take him home and love him.

<<I’ll just look the other way. Making eye contact is the surest way to encourage her to come over and muss up my fur. >>

Anyway, he’s been lounging in a different kitty bed of late — one with a lovely green blanket that picks up the color of his eyes.  Don’t you just want to pick him up and bury your face in his soft fur? Hard to believe so many humans think mackerel tabbies are “plain” and “common.”  They’re actually some of the longest-lived house cats.

<<So far so good. I’ve got 2 paths of escape if she starts trying to play with my feet. It’s so completely annoying that she won’t leave them alone. They’re ticklish. How’d she like it if I licked her bare feet and washed her hair?  Come to think of it, I’ve tried that. Shampoo and conditioner really taste awful!>>

Yellow Mousy Stops for a Snack

Yellow mousy was having a busy morning. The human found him in the kitchen on the floor by the table. He must have climbed out of one of the kitty toy boxes, trundled down the stairs, and passed through two rooms to get there. The human escorted him out of the kitchen — or, rather, she tossed him unceremoniously into the next room.  The human then prepared the morning meal and distributed 5 kitty bowls between 2 rooms to keep the worst offenders from eating all the food before the less aggressive fur balls had a chance to get some food.  Later, after her own breakfast, the human walked around and collected the empty bowls…except that one of the bowls wasn’t empty.  And no, the human isn’t that good a shot. Yellow mousy climbed in for a snack all by himself…or maybe he had a little kitty help…

The human came down stairs the other day and found the Girly Girly sitting on the newel post at the bottom of the banister. No clue as to what she was doing there but she sure looked like she owned that small patch of real estate (leading the human to suspect this is not her first visit).  Once the human moved on to the kitchen and started with food preparation, the Water Monster jumped down and joined the crew. Curiouser and curiouser… 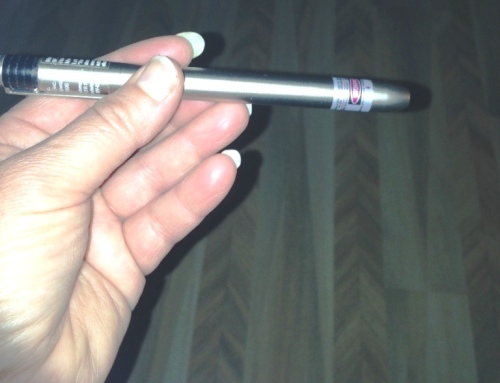 <<The lazy human finally got her act together, dug through an old briefcase, and came up with a laser pointer we can chase.  It’s about time. The other one broke months ago.>> 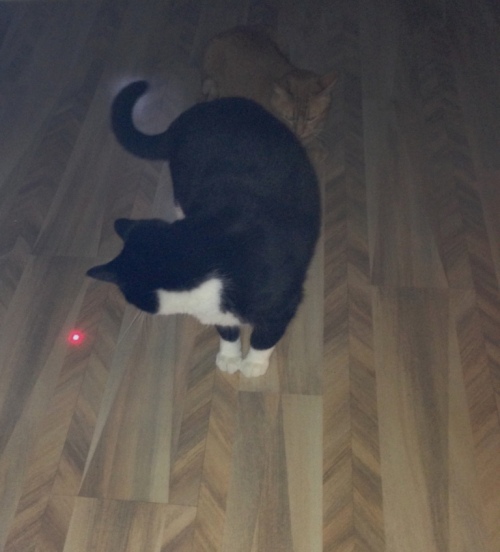 <<Now that it’s darker earlier, it’s really fun to chase the big red dot around the floor and up the walls.>> 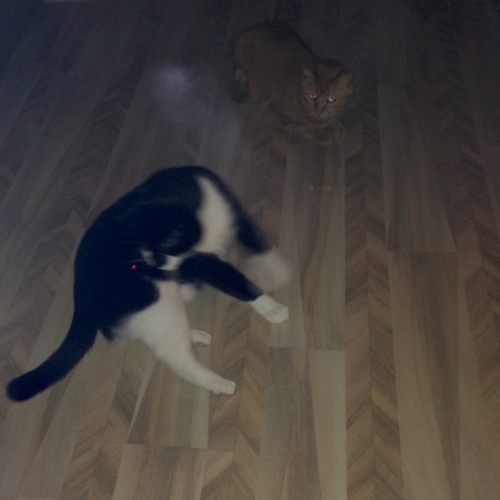 <<It’s such an entertaining thing to do after we eat our evening meal.  And since it disrupts the human’s own meal, that makes it doubly fun.  She needs more exercise anyway.>> 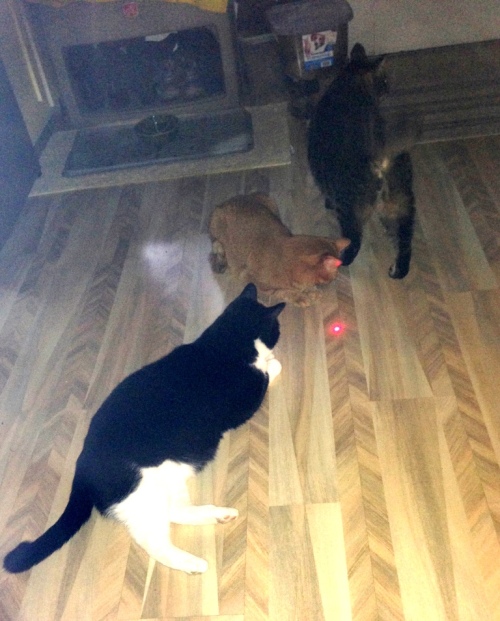 <<Of course, since we need the human to operate the contraption, and she doesn’t do anything for free, we have to endure more blasts from the light on the cursed camera.  Baaah, humans!>>

Recently we had a snow storm that dumped between 7 and 14 inches, depending on how close to the various lakes you were.  The human happened to walk by and glance in to one of the bedrooms only to see Corky looking down at the snow. He didn’t seem terribly pleased with all the white stuff.  No wonder he’s cranky! 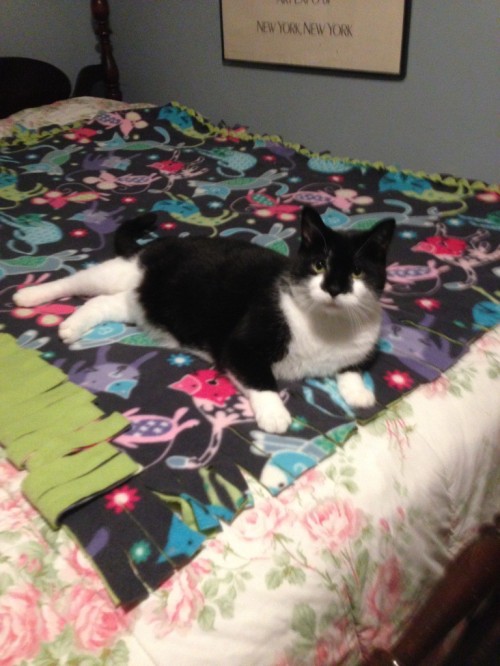 The human has been working hard to make no-sew fleece blankets for family and friends for the holidays.

The key words here are fleece and human working.

What craft project is complete without a bit of cat fur on it? Straight cuts are greatly over valued.  Where’s your gratitude that Santa’s Helpers are on the job?’

Tiny Junipurr is Tiny No More

My niece’s new kitten, Juniper (aka Junipurr) is not so tiny anymore. She’s growing up fast. Above is a photo of her taken about 6 weeks ago.  And below is a picture of her from about 2 weeks ago. She’s really starting to fill out and reportedly is quite the love bug.  Awwww.  Good thing the city kitties can’t meet their country cousin face to face, as I’m sure at least the tuxedo twins would immediately teach her how to flood the water bowl and walk on table and counter.