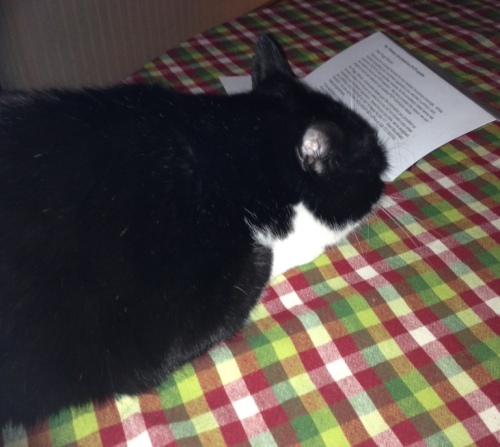 The kitties know they’re not supposed to get up on the kitchen table or the counters.  However, if they decide they want to get up there, they get up there even if the human is sitting right in front of them with her lower jaw gaping open (not an attractive look). Normally, she quickly regains her composure and shoos them off, but they just grin insolently over their shoulders as they depart as though to say, “we’ll be back!” 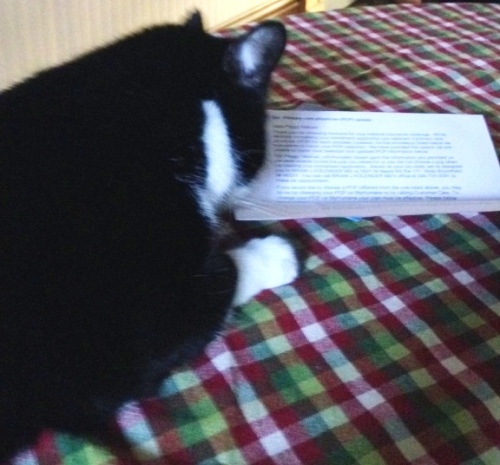 The other day, the human was trying to have her breakfast while opening and sorting through mail she’d retrieved the previous evening.  She opened one particular letter and set it aside to remind herself to check on something. 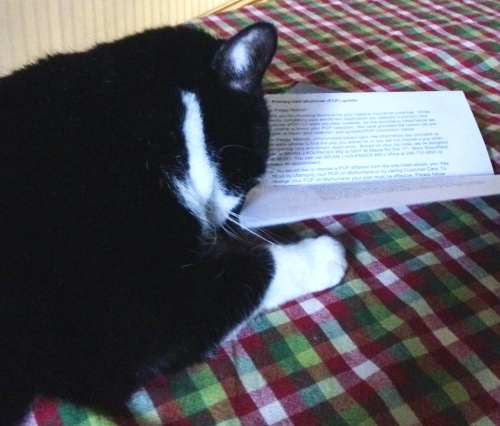 Pepe, who’d already had multiple rounds of play with his toys that are tied to the back of “his chair” and was sitting up watching the human (on the off chance food might appear). Suddenly, he inched his way across the table toward that letter and started sniffing and nuzzling it. 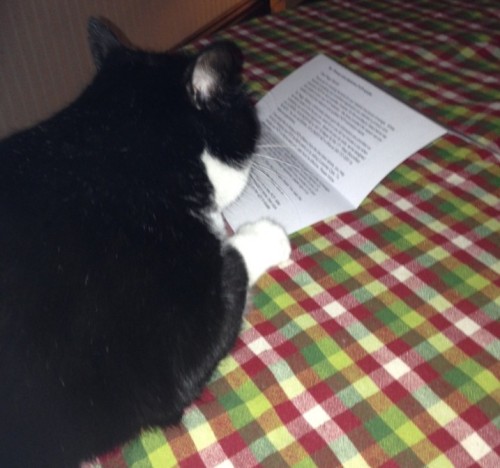 He managed to move the letter all around on that side of the table as he explored its bouquet. 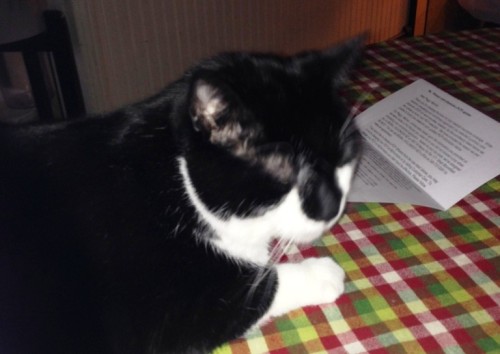 It must have had some interesting odors, because he gave it quite the investigation, as you can see. (Perhaps someone had worked on it while eating lunch at his/her desk.) The human, too entertained watching to chase him down off the table, just took out the evil camera and started snapping. 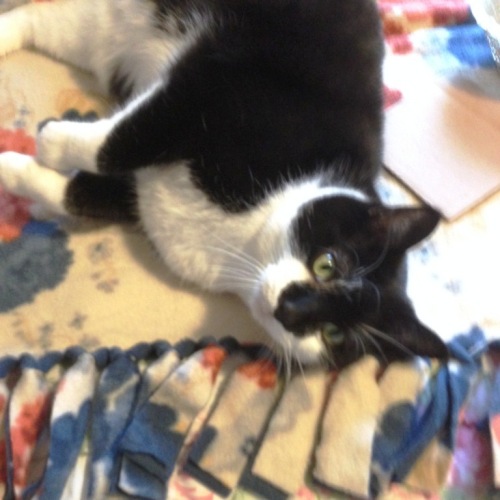 A few more shots of the kitties helping make no-sew fleece blankets for friends and family over the holidays. 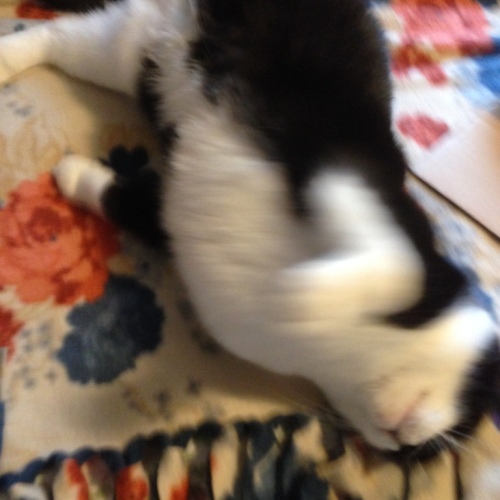 They certainly were hard-working kitty elves this year. 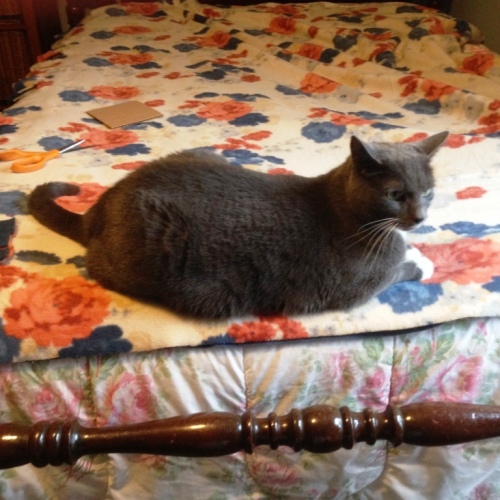 No wonder Sandyclaws brought them so many toy mice. 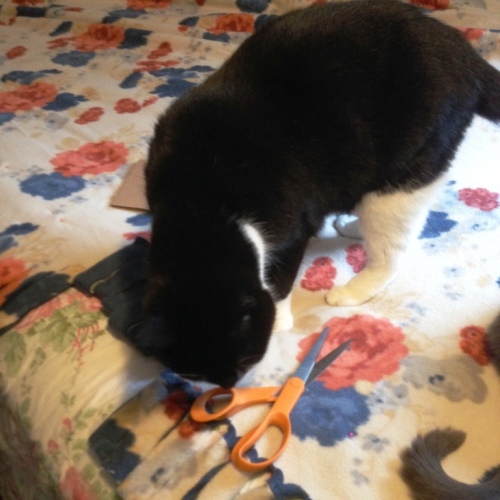 They do find any and all fleece irresistible, especially when the human is involved. 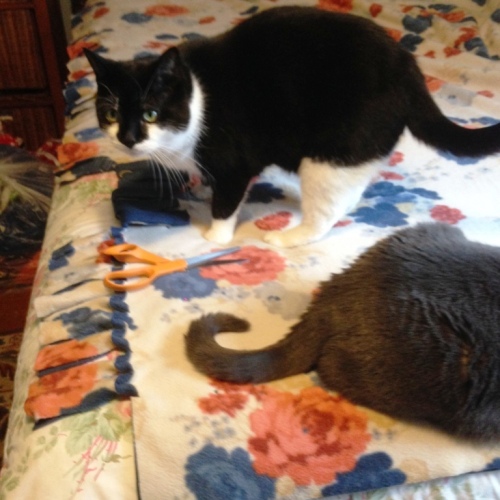 The blankets seem to have been a hit with all who received them.  It helps to have a little elven magic woven into the gift. 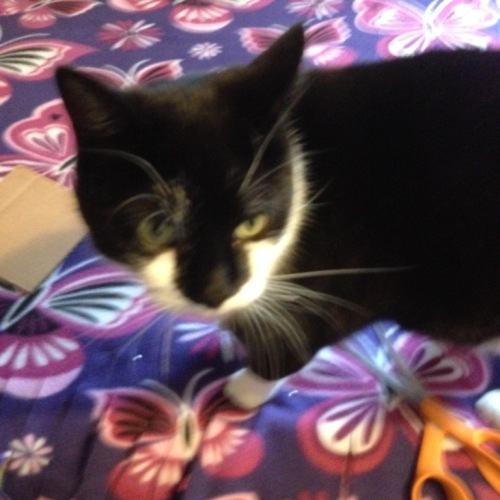 It’s also important to do quality control testing to ensure each blanket is soft, comfortable, and will stand up to the rigors of daily use. 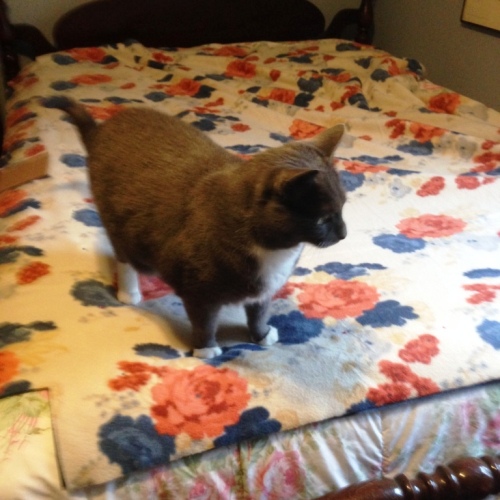 Of course, it’s a good thing most of the blankets went to other humans who love and cohabit with other furry people as these gifts certainly left the house with kitty scent on them, not that the numb human could tell. 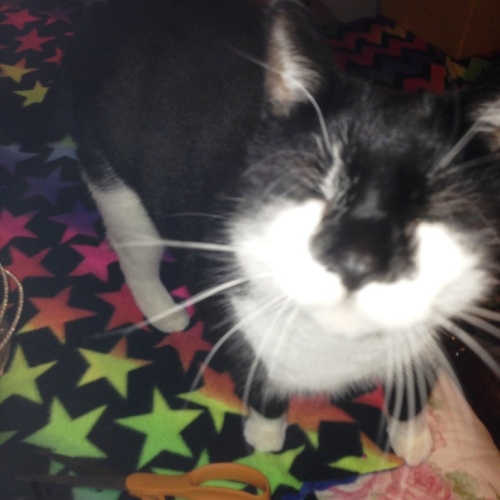 <<If only she wouldn’t use that cursed camera with that bright, bright flash. It’s enough to make me see stars afterwards.>> 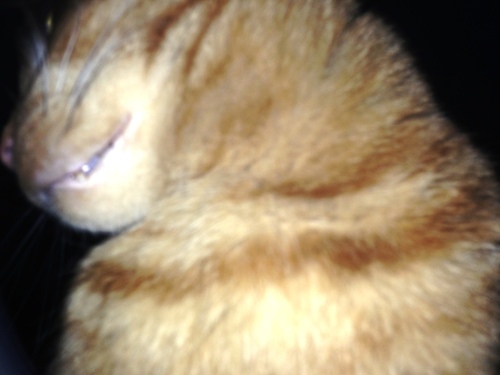 Fireball used to be the human’s pillow pal. He’d climb up on the pillow and literally curl around her face and head when she was sleeping.

<<Back in the day, this is what it was like to wake up and see a giant red face in your face. Scary monsters!>> 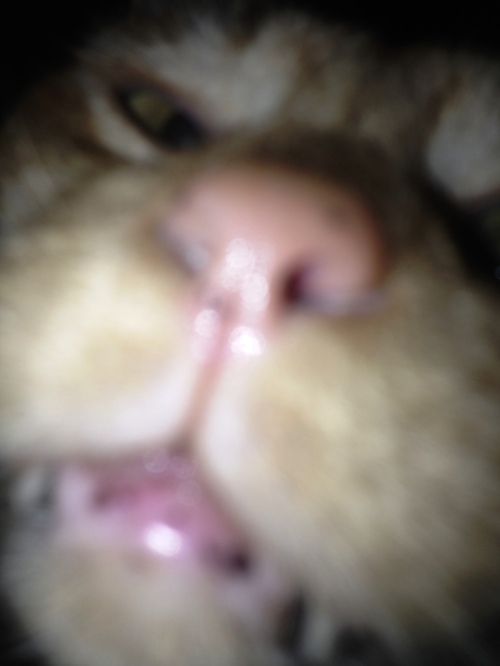 These days, it’s so cold out that he’s been favoring an under-the-covers cuddle where he can stretch out the length of the human’s arm and lick the skin half off her fingers. 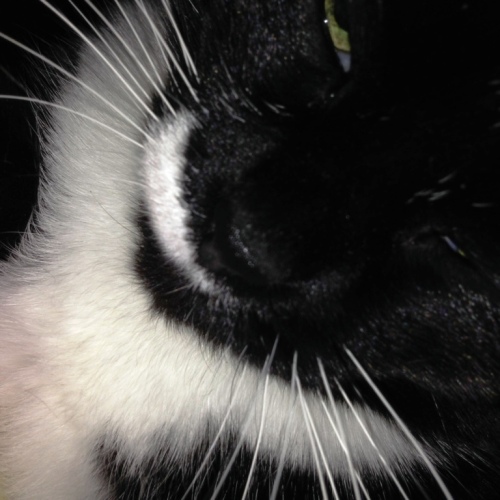 However, not to be outdone, the Girly Girl has since taken over the job of being the pillow pal.  She favors an awake human in the early-morning hours. She loves to roll that soft but dangerous tummy up against the human’s face. While she doesn’t wrap herself around the human’s head the way the Baby Comet does, she definitely cuddles and does head-rolley somersaults that occasionally lead to her crashing down on the human’s face and giving her nose bleeds. (Ouch!) 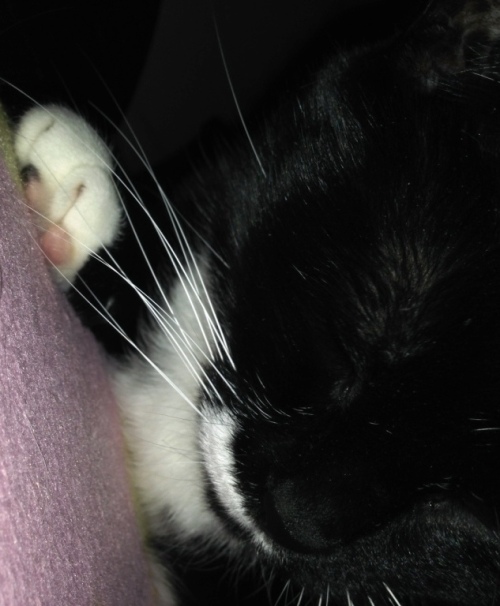 She also grooms the human’s forehead and eyebrows, and occasionally a bit of her head of hair with a vengeance. <<Soap and water are so much less effective than kitty spit!>> 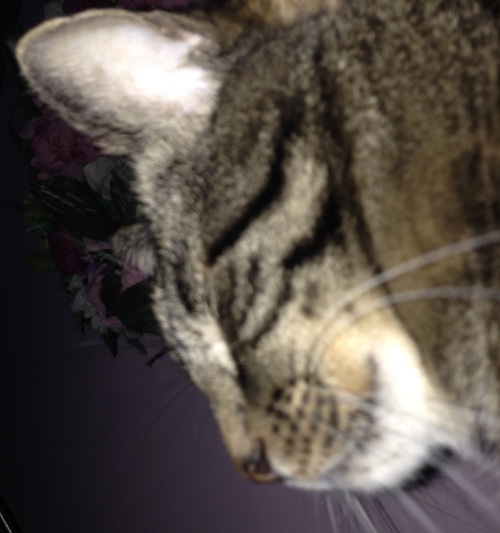 However, this morning the human got a HUGE surprise:  his Eminence, Caesar Tiger Bear decided to become a pillow pal for the first time in almost 4 years. He’s been on the pillow before…in fact, both he and Fireball like to climb onto it when the human isn’t there and slide down it (it’s a wedge). This time he climbed onto the pillow, lay down next to the human’s head, and assumed sphinx pose, stretching out those gorgeous forepaws. He also started to sing. The human, by then wide awake and thrilled to bits, reached up and stroked him. A couple of times she was foolish enough to wiggled a finger near the Caesar paws and was quickly rewarded with Caesar claws. He’s amazingly fast when he thinks something might be prey.  He stayed at least 20 minutes, which is an all-time record, as neither Fireball nor Mac ever stay that long.  When the human finally hauled her lazy butt out of bed, she did so with a huge grin on her face. <<Mustn’t do that too often or she’ll start expecting it of me.>> 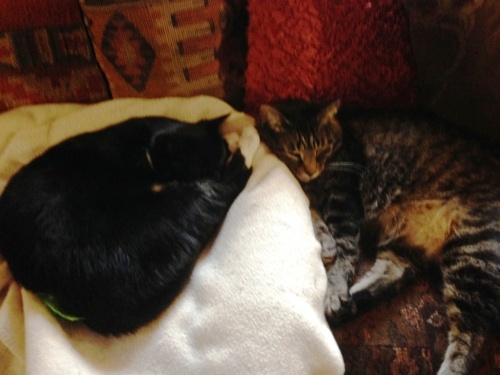 Let’s hear it for the snuggle kitties.  It’s a rare sight to see only one of the kitties sleeping alone somewhere. There usually are two close together and often three.  I guess it’s nice to share! 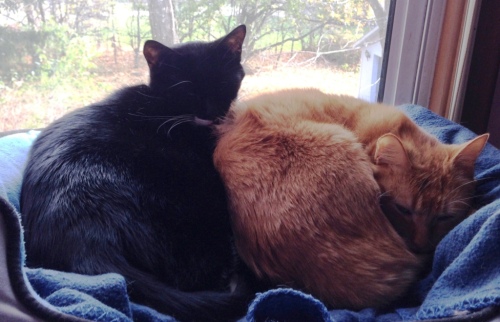 The Paws that Refresh 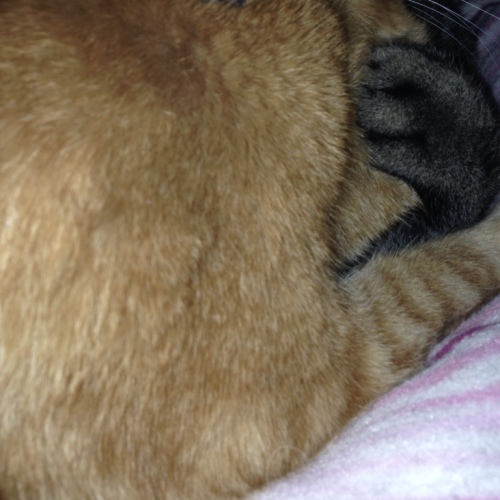 See that interesting intersection of grey/black and red/orange fur? That’s Caesar’s huge forepaw (one of them anyway) wrapped around Fireball’s head. In fact, if you look closely, you can see a bit of the tip of an orange ear that’s being mashed down by that huge black & grey paw. Fireball stepped off the human (after grooming her fingers until the skin was ready to fall off) and hopped into a kitty bed with the Big Guy. The Emperor reached up and grabbed FB’s head and pulled it down and started grooming him just as energetically as the human had just been groomed.  That little striped orange thing on the bottom right is Fireball’s right front leg.  Caesar had quite the lock on the Baby Comet’s head and neck and Fireball wasn’t going anywhere until the Caesar was through. Unfortunately, per usual, the human was giggling so much as she sat up and tried to take a photo that the shot wasn’t as good as it might have been. However, hopefully you get the sense of how futile it is to try and resist the affections of His Majesty, the Borg. 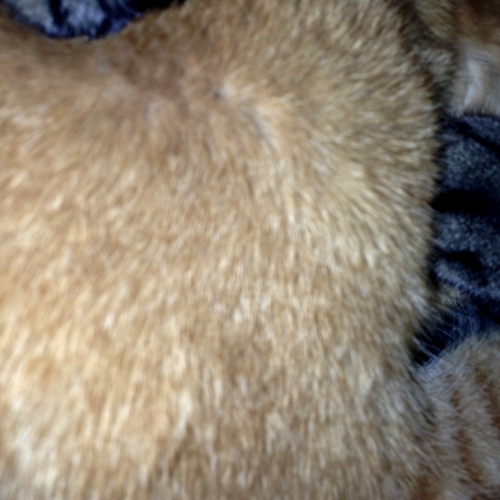 Mac and Corky were occupying the 2 kitty bed next to the human the other morning. Fireball and Pepe were lying on the mamma-fur blanket, and Caesar was climbing around the human and her pillow looking for pets.  Once he was happy, he sauntered off and climbed into the kitty bed occupied by Mac, who normally happily moves over and accepts a bedmate, but not this time. 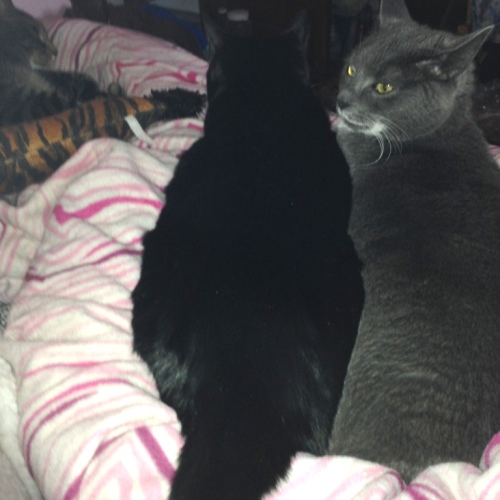 She got up and came over and draped herself across the human. Once she’d gotten the required number of hugs and pets and kisses, she sauntered off and climbed into the other kitty bed with Corky. 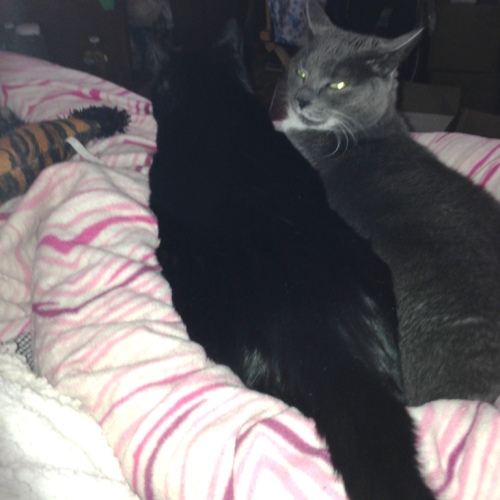 You can tell from the look he’s giving how well that went over!  Just like Mac, he quickly got up and left the bed entirely. You’d think an alien lifeform had just invaded his home. Then again, she is the plesiosaurus so maybe an alien DID invade his home. 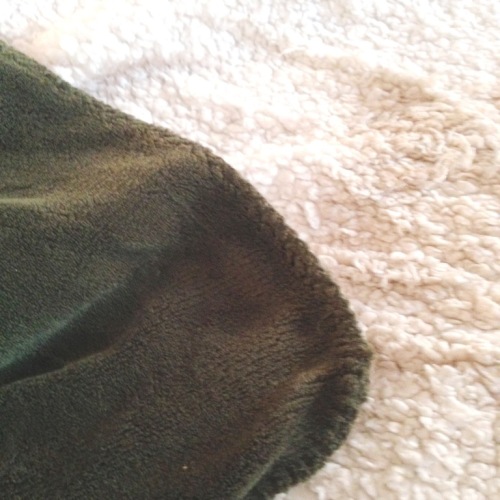 One of the human’s friends gave her a lovely soft blanket a few years back.  On one side it’s got a soft, supple velour-type material and on the other side it’s an extremely soft synthetic shearling-like fabric.  Mac immediately claimed it as her own and it went into a kitty bed in the human’s work cave. 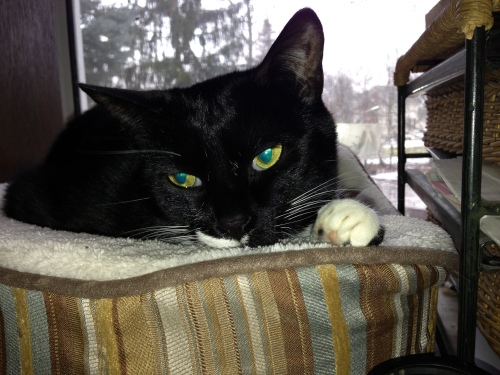 Now that Corky and Pepe live here, the human decided the house needed a few more kitty beds, so she repurposed the office bed that didn’t get used very often and brought it upstairs and put it on the guest bed right by the window and filled it with fleece blankets. The bed was immediately claimed by Corky, although Mac and Fireball and even Pepe use it too to keep tabs on the wildlife on the west side of the property. 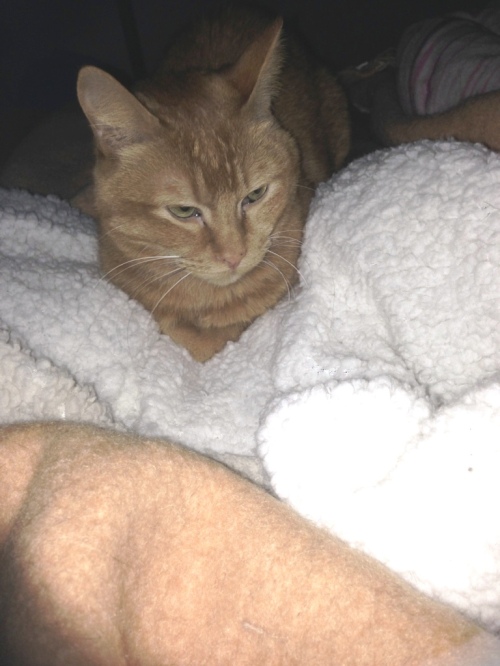 Meanwhile the soft blanket went on top of the human’s bed and has been claimed by all the meows.  They climb on the blanket and start mixing and making all kinds of delightful sounds.  The human calls it the mamma-fur blanket, as she imagines it reminds them of nursing on their mothers.  Fireball is an especially big fan and has taken to sleeping on top of the human’s legs at the foot of the bed just to be on that blanket. 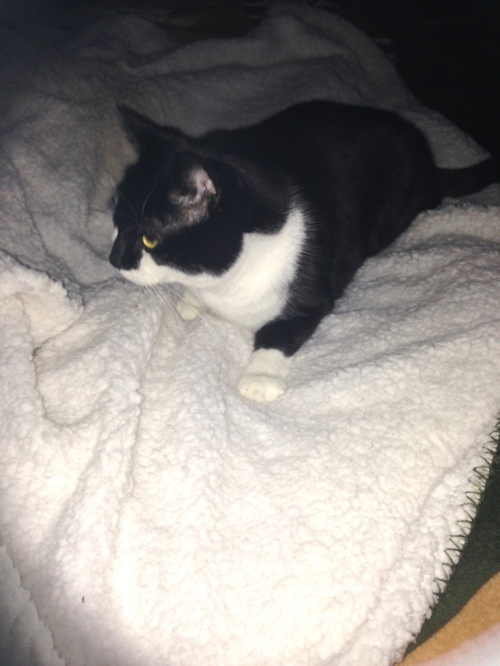 Pepe also is a big fan, especially when the human runs her fingers under the fabric and he can chase them.  Who knew such kitty joy could come from a fabric throw?

Water, Water Everywhere but in the Water Bowl 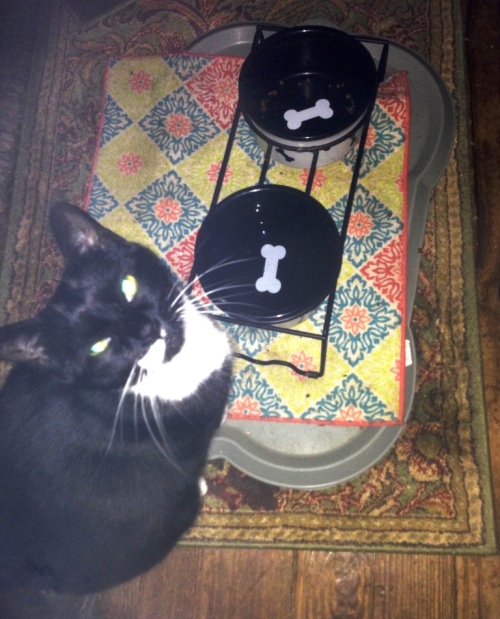 Sad to say that the water monster has been very busy the last few weeks. Not sure if she’s particularly bored or just feeling mischievous, but she’s been throwing water out of every single water bowl in the house and flooding not just the absorbent dish-drying pad and rubber mat under each, but also the rug the mat sits on and the floor around and under all the other protective layers. It got so bad downstairs (with 3 major and separate floods in a single day) that the human removed the green cabbage water bowl for a few hours while she considered how in the world to offer water without having the floors destroyed. Maybe a thicker/taller-sided boot tray? The little minx has also been flooding the upstairs big water bowl leaving the other cats nothing to drink. In fact, in true Annoying Cat fashion, when she decides she wants a snack in the middle of the night, she starts slapping the water in the water bowl, causing the light-sleeping human to leap out of bed. In that groggy state, there is a tendency for the 2-legged to dispense an overly larger portion in the crunchy bowl, which honestly is likely the reason the plesiosaurus does this in the first place.  She is one conniving kitty despite that adorable-looking face.

Evil, thy Name is Human 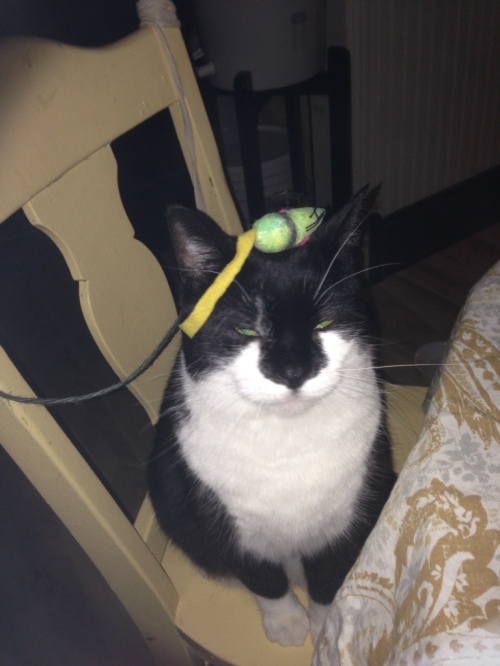 <<Oh, the indignity of it all. To think she thinks this is funny.>>