You WILL Let Me Wash Your Face!

This is Caesar in action.  Imagine having your head and neck mangled like that.

Clearly Fireball had a dirty ear or face or whiskers that needed scrubbing.  Equally clearly, Caesar decided that the Little Red Bee wasn’t equipped to do the work on his own, so The Big Guy came to the rescue.

It’s a wonder Fireball’s neck isn’t out of kilter after all of that mauling with those big paws. And of course with Caesar spit on him, his fur will be standing on end for hours.  However, at least it will be clean!

Here are the kitties trying out some new variations on the paw-dangling phenomenon that is so prevalent in this house.

First you have the “twoferone” variation, which Caesar and Mac are demonstrating with grace. 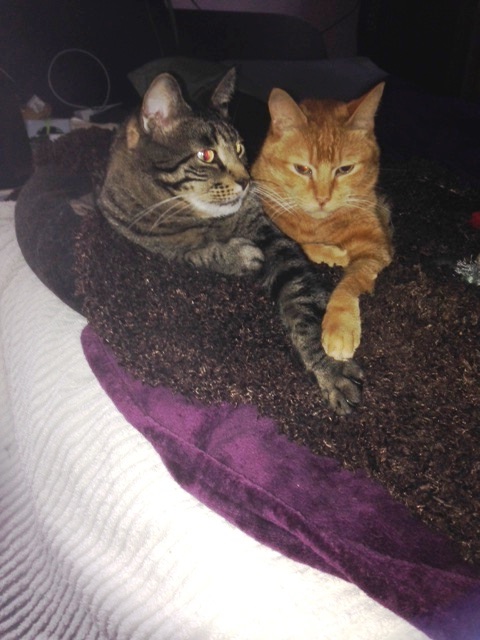 And then you have Caesar and Fireball showing us how to do the paw stack with double-swept reverse paw positioning.  It’s a very sweet options for best buddies — especially when you have a younger kitty who mimics everything the older kitty does.

Of course, here’s the Trio demonstrating the triple stack with the top two layers somewhat rearward of the lowest. Mac is contributing two paws to Caesar’s one (although he’s spreading his toes and extending his claws).  Fireball is just ignoring the whole thing.  This position is also a variation of the puppy pile with three kitties. Caesar was there first, later joined by Fireball.  Mac had to mash herself between both of them as she always wants to be in the middle of all the action.

In all the decades the human has cohabited with cats, she doesn’t remember any group of felines who did this amount of paw dangling.  They do it at any and all times of year, so it’s not just because it’s been hot and their feet are toasty.

Corky & Pepe Let Down their Guard

The human took the stack of rolling balls upstairs and put it beside the other scratching disc in the hopes of getting the kitties to play with it. 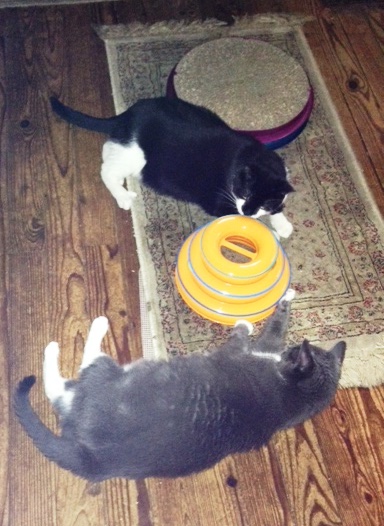 A couple of times different cats went and played with the old toy, but the new one got completely ignored. To encourage interaction with the toy, the human kept bending down and spinning the balls on the new toy either fast or slow for the kitties to see.  They looked at her blankly.  A couple of times she even spun balls on both the new and old toys at the same time. They were not impressed…nor were they going to show any interest in the new toy. Mostly they looked bored. 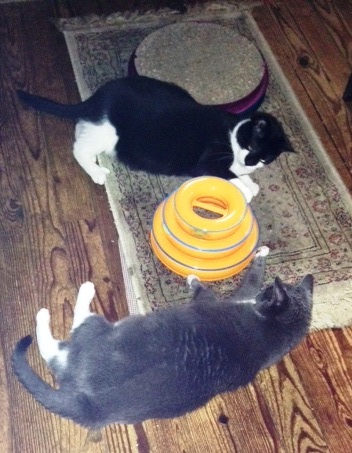 A few days later, first Corky and then Pepe decided to play with the new toy.

They clearly slipped up because not only did the human witness them playing with the toy (and each other), but she recorded the experience on her camera. 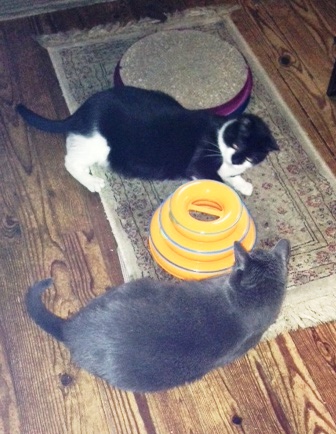 Could that possibly mean they were having so much fun, they didn’t notice the human or even care if she saw them?