Finally, a New Cat Bed Gets a Lodger 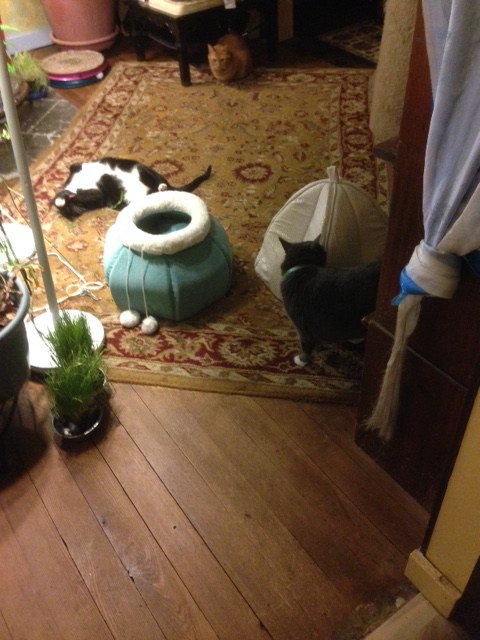 Remember the two new kitty beds the human dragged home after Thanksgiving? Well, it would be an understatement to say they have not gotten a lot of love. Despite their incredibly plush interior and the opportunities each offers for a kitty person to hide in plain sight, they have had little use as proper beds.  (The human got them on clearance, so therein may lie the problem.) 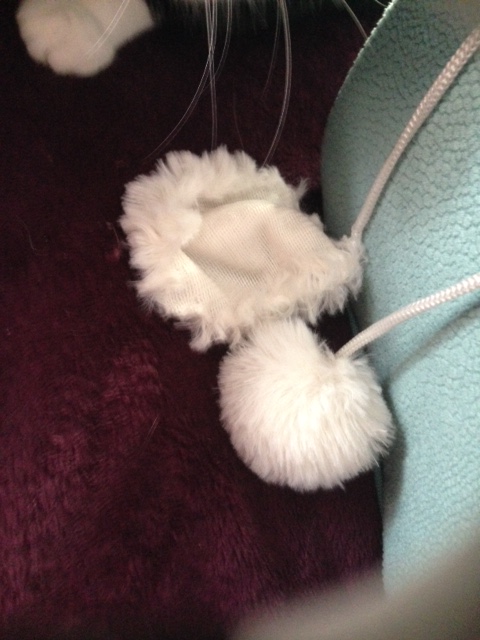 Pepe does love to attack the pompoms on the blue one that looks like a jewelry pouch. In fact, he batted the decorations so hard that he split the thread holding one of the poms together, then had a grand time chasing the fibrous ball of fluff that had been inside. (It’s since been lost, so no go on the human fixing it unless she wants to buy a big bag of fiberfill just to fix a single pompom.) 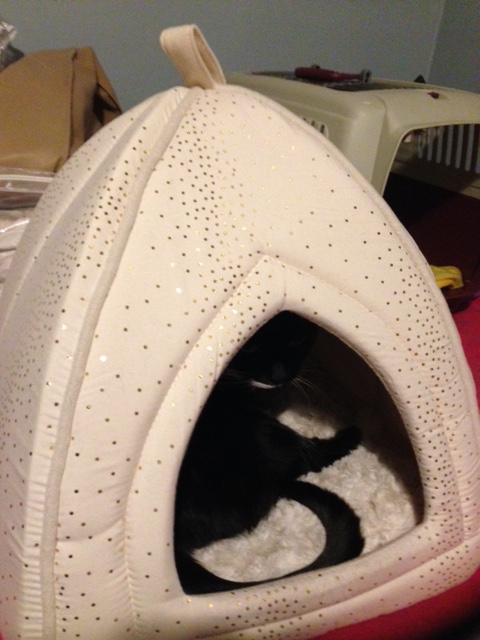 However, the triangular/teepee-shaped bed finally got a visitor. 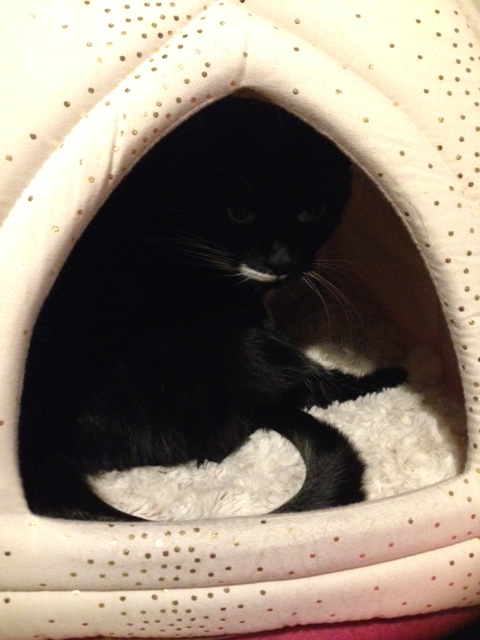 The human spied the inhabitant, flipped on the light, and edged ever closer with the camera, much to the annoyance of the feline in question. It’s behavior like this that earns the human scowls!

Happy New Year, one and all. Thanks for following the antics of the meows over the last 12 months.

Rolling Out the Feathers 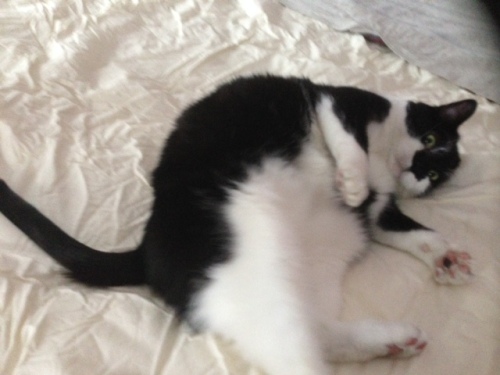 The silly human found a down comforter she’d put away and forgotten about. 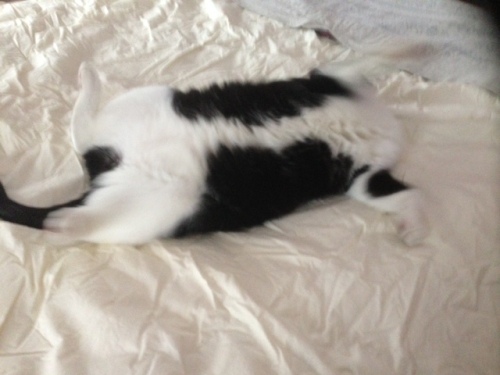 She pulled it out, fluffed it up, and added it to the bed. 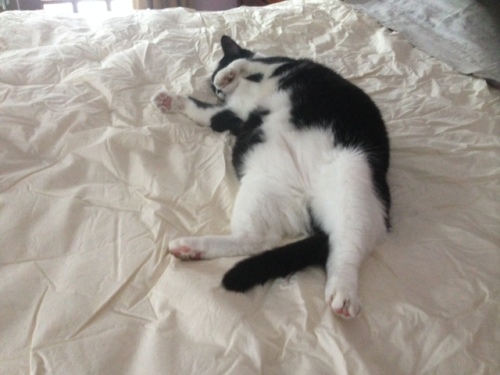 Of course, Pepe had to come along and make sure that the feathers were properly aligned and not too fluffy. 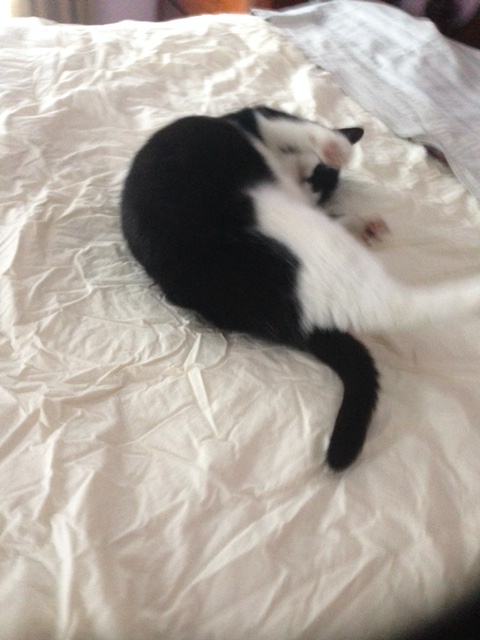 It’s a good thing someone’s watching out for the 2-legged. Clearly, she can’t figure out these things on her own. 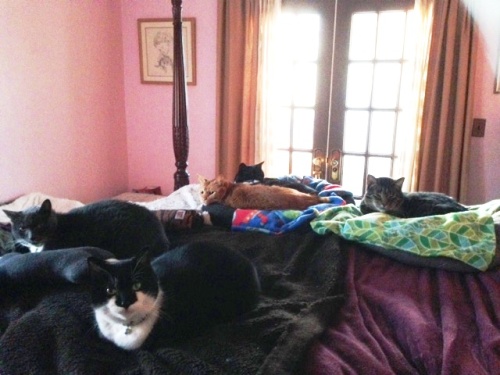 Let’s be honest. Cats hate change even more than humans do. And when they have a lot of change in their environment over a short period of time, it can sometimes lead to interesting forms of acting out.  So the human brought this on herself.  She decided to flip the furniture in her bedroom on Thanksgiving Day. What had been on the west wall is now on the east, and vice versa.  Of course, while this was all going on, the evil vacuum cleaner was busy sucking up all kinds of things, so the cats stayed far away. Later, after the noise quieted down, things were put to right, and the far-infrared mattress pad was turned back on on the freshly made bed, the cats appeared and began to check things out.  Talk about curious!  One after another they jumped up on the bed, sniffed and looked around, then jumped down only to jump up on a different piece of furniture to explore. Clearly they were quite at a loss as to why the human would do such a radical thing without asking their permission. To further intensify things, the human had washed a bunch of their fleece blankets and hung them out to dry, then brought them inside (smelling of the great outdoors) and put them back in their kitty beds. They love it when they have clean, fresh-smelling blankets!  That evening, there were some mighty interesting and noisy goings on in the house. Fireball ran around chirping loudly and even tried shredding the mattress foundation under the human’s head.  Caesar alternated whacking the ball around on the scratching disc and chasing other cats around playing tag.  Mac tried out 3 different kitty beds in their new locations much like Goldilocks visiting the three bears.  And Pepe and Corky chased each other quite loudly. It was a regular circus that went on until about 2 am. Fortunately, the cats have settled down now and seem to enjoy the slightly modified sleeping arrangements. Still, what was the human doing making a change like that without asking? 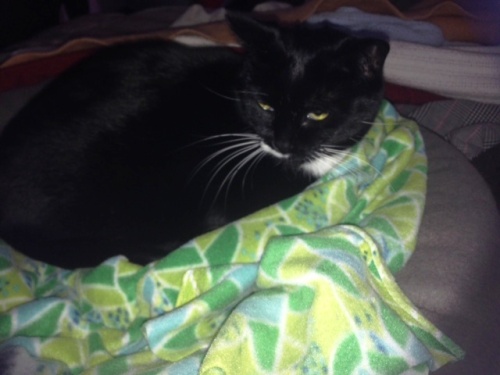 Well, the human did one thing correctly for the holidays. She picked up 2 more fleece remnants at the fabric store and put them in the main kitty beds on the human’s bed. The new fuzzy blankets are colorful and fluffy, so everyone seems to like them a lot.  In fact, between the extra layer of blankets and the far-infrared mattress pad, it’s hard to get the cats out of the kitty nest in the morning for breakfast. Of course, if they hadn’t gotten the human up at 3 am for food, they probably would be hungrier and therefore more incentivized to eat at the proper time (and the human would be better rested). 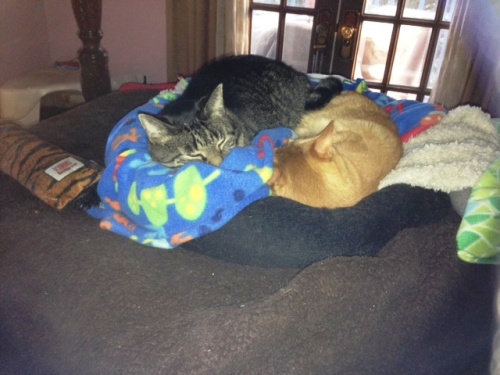 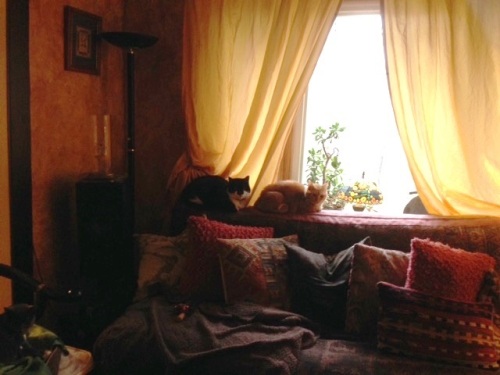 The cats never cease to amaze the human.  Certain personalities that don’t get along most of the time can suddenly be found cuddled together.  Take this sequence of shots of Pepe and Fireball on the back of the couch. (And note that Corky is sitting nearby in the bottom left of the frame.) 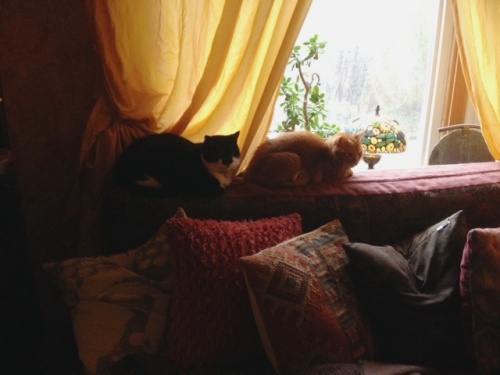 Pepe often chases Fireball. While I don’t believe he means any harm by this — he chases anything that moves and half the things that don’t some days — still he scares Fireball because he’s so big and aggressive. 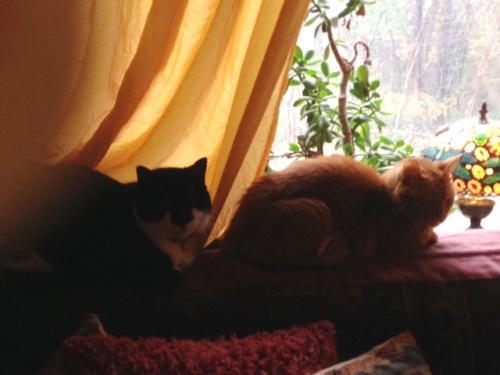 Yet here they sit quite close without any concerns whatsoever…at least none that they showed. (Fireball would have been out of there if he felt the least bit threatened.) Go figure!