Just when you think it’s safe to trust your human, she pulls something like this. First, with the promise of a snack, she lured the Merkitty into the downstairs bath, then quickly shut the door, trapping the panicked watery one. Next, the human picked her up and started trimming toenails quickly and efficiently, despite sad little whimpers from Mac. The human made such good progress on the forepaws that she actually trimmed the rear ones as well.  Despite repeated attempts, the human was unable to trick Caesar in a similar way, so his meeting with the clippers occurred later in the day in a totally different room and setting. After a little post-work snuggle, the tricksy human got up, slipped clippers into her pocket and disappeared into another room where she sat and waited for the meows to come in and bump her leg. When the Big Guy appeared and snuggled the human, she picked him up (<<Horrors!>>) and carried him (<<Double horrors!>>) back into the bedroom where she proceeded to clip claws (<<Triple horrors!>>) . She got all toes but one dewclaw on the front paws and then, emboldened, she managed to get 2 claws clipped on one rear paw before Caesar had had enough and really started putting up a struggle. While Mac forgave the human fairly quickly and was back draping herself around the human’s head (<<and hogging most of the pillows>>) before long, Caesar has kept his distance and will not let the human get close. It will be weeks before a human in motion will be able to get close to the Big Guy and even longer before he will let down his guard enough to be picked up again. Still, no blood was drawn among cats or human, and now two of the monsters are set for a couple of months before the process has to be repeated. <<Whew!>> <<Does no one care how much we suffer?>>

(c) Copyright 2020, PeggyMalnati. All rights reserved. Images my own. 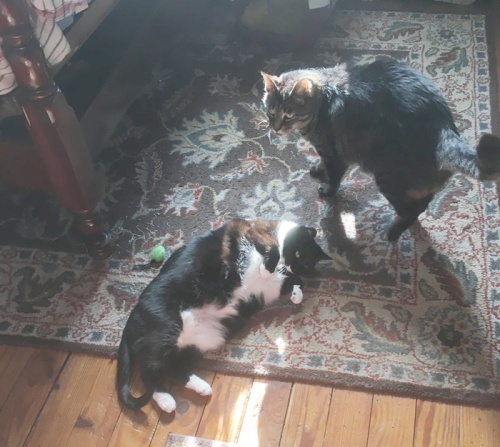 Well, the evil two-legged had a bit of time on her hands. While she was eating her lunch, Caesar and Mac came down for a visit and the Big C made the mistake of getting too close to the human, who scooped him up in her arms and headed into the bathroom where she shut the door, wrapped the struggling prisoner in a big towel, and pulled out the horrible nail clippers. <<Mind you, the terrible human has never once trimmed too high and hurt the kitties, but you’d think she was in the habit of regularly removing toes instead of a tiny bit of claw the way they fight the process.>> There were some mighty unpleasant sounds that ensued, but before too long, Caesar Tiger Bear emerged intact except for his front claws being a bit shorter. He only held a grudge for about 10 minutes before he was back whacking his body against the human’s leg. Earlier in the week the horrendous human managed to capture the Merkitty and trim her aquatic flipper claws. It took her about 6 hours to forgive the transgression.

(c) Copyright 2020, PeggyMalnati. All rights reserved. Image my own. 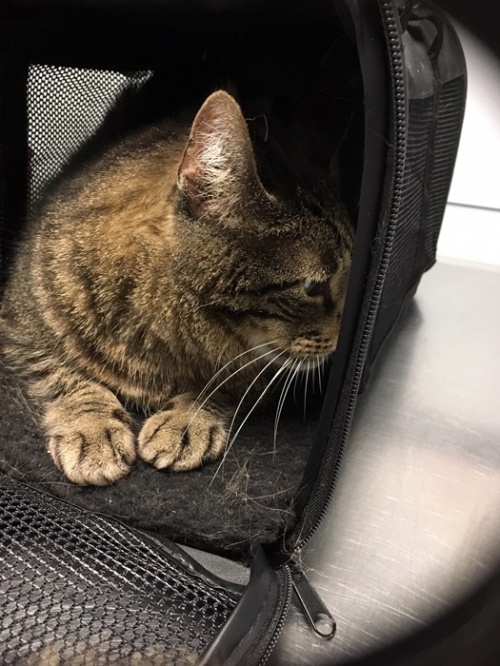 It was time for a vet visit for Caesar. Caesar hates vet visits.

The human had corralled him into a new kitty carrier, but that didn’t improve his mood. In fact, after unzipping the front and trying to coax him out onto the exam table, the Big Guy refused to budge. 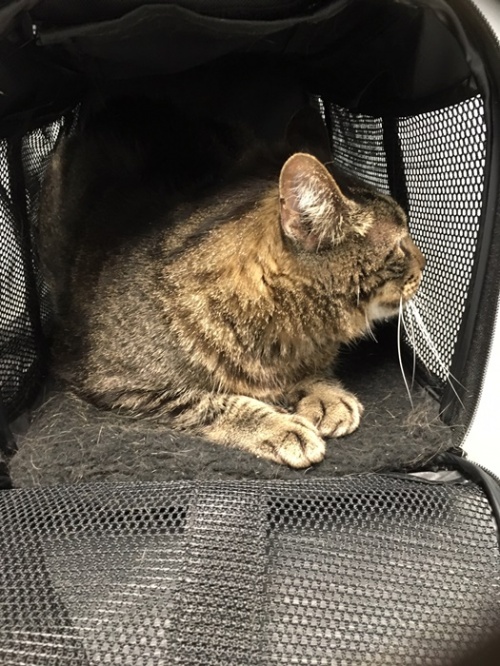 While 2-legged and 4-legged waited for the doctor to come in, the Emperor turned his face away and refused to give up the grumps for his human.

(c) Copyright 2019, PeggyMalnati. All rights reserved. Photos my own.

Krang Drives to the Vet 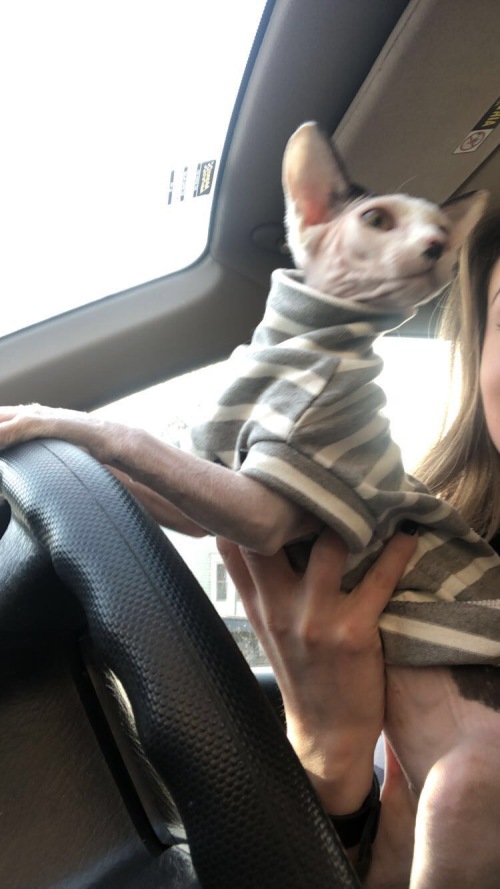 It was time for Krang, the Penta Pack’s new cousin, to go to the vet for a checkup. Fortunately, the young Sphynx is multi-talented and offered to drive.

Which torture device do you think is most scary? 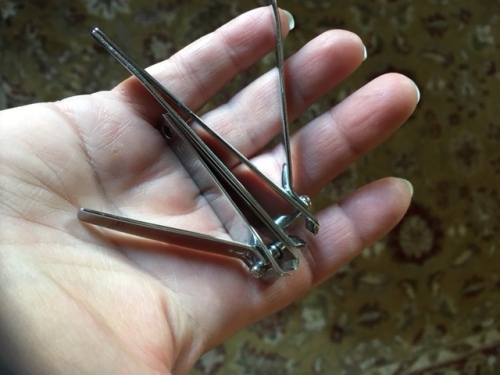 It’s a close call between the nail clippers and the vacuum.  However, the clippers only come out once a month and only three of the cats have front claws that need to be trimmed.

The vacuum, on the other hand, comes out multiple times a week and causes pandemonium among all the boy kitties.  Yes, you guessed it, Miss Mac is not afraid of the vacuum as long as she’s up high and it stays down on the floor and doesn’t come too near. She just smirks at it. The boys, on the other hand, run for the next floor whenever they even hear the cord rattle and long before the scary motor turns on.

By the way, bells didn’t even make the list this year. That’s got to be progress of a type.

(c) Copyright 2018, PeggyMalnati. All rights reserved. First photo from Fotolia.com. Other photos my own.

Do You Think this is All An Excuse to Run Away and Play with Dogs?

<<It wouldn’t be the first time that our human disappeared for a day or two and came back smelling like a stinkin’ dog.  Maybe she’s off cheating on us. Sure hope she doesn’t bring one of those wretched creatures home with her. She does that, you know. Any poor abandoned creature will do.>>

Our Human is Running Away! 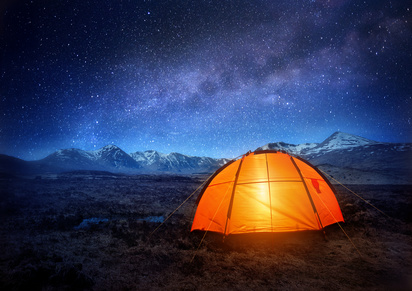 <<She’s been threatening for more than a week to run away from us.  Ha, as if that was even possible! Besides, when the other human visits us, she gives us way more snacks and she plays with us more than our own human does. On the other hand, she doesn’t sleep with us and therefore it’s far harder to mess with her head. Besides, that human smells like dogs all the time.>>

A friend with a business that uses big rolls of fabric asked if the human thought the kitties might like a big cardboard tube to play inside. While Pepe and Corky like paper bags (but never plastic ones) and Mac will occasionally entertain herself in a cardboard box, none of the felines had shown any love for a cute crackly fabric tube the human had bought many years back. Still, why not give it a try, since the cardboard tube could always be recycled.

Pepe stuck his head inside both ends but wouldn’t venture further.

Mac also stuck her head in but that was the end of it.

The rest of the cats couldn’t be induced to explore the tube even that much — despite the presence of freeze-dried meat snacks the human tossed in for fun.

Fortunately, while the kitties had no use for the big tube, the human found it was just perfect to hold a bunch of wrapping paper and smaller mailing tubes. Cats…

(c) Copyright 2018, PeggyMalnati. All rights reserved. Photos my own.